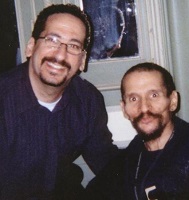 NY Writers Coalition is celebrating its 20th anniversary this year, and we’re excited to share photos from our archives and the stories behind them over the next several weeks. We wanted to start things off by telling the story of one of our earliest workshop participants, Nelson Figueroa.

Before the official formation of NYWC in 2002, Founder and Executive Director Aaron Zimmerman led workshops for three years at The Prince George, supportive housing for low-income and formerly homeless adults and people living with HIV/AIDS. It was there that he met Nelson Figueroa, a participant who joined this first NYWC workshop.

Aaron wrote about this experience in a 2019 piece for Amherst Writers & Artists’ archives. “One day in [the] workshop, I looked at Nelson and had a flash of recognition that he might not be with us for much longer, and that when he passed away, his writing would be lost forever. He kept reams of his poems in various folders and envelopes. I asked him if he’d like to publish a book of his writing, and I think the process of putting his book together was a source of purpose for him.” The cover of Nelson’s book Pigs, Parrots, and Pain. 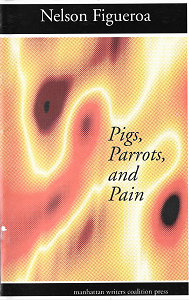 The cover of Nelson’ Book: Pig, Parrots, and Pain.

In May 2002, we published Nelson’s chapbook of poetry, Pigs, Parrots, and Pain. Nelson read alongside LAMBDA Literary Award-winning poet Eileen Myles and other writers at NYWC’s first event. The publication of his writing had a profound effect on Nelson.

“[He] would call me from time to time and ask me to print more copies because he said, ‘I think I can move them,’” Aaron continued. “He was out hustling, selling them wherever he went. Something in his identity in the world, with his family, and to himself had shifted, and he fully claimed being a writer.”

“Working with Nelson helped form a roadmap for how supporting someone as a writer can create deep and very meaningful impact,” Aaron said. “This act of preserving and amplifying voice, providing safe space, and exploring the power of writing to transform has been repeated countless times [at our workshops].”

Throughout the years, NYWC has held myriad creative writing workshops, readings, and events, and we have also published numerous chapbooks. We wouldn’t exist without that first workshop at The Prince George, and Nelson’s writing and influence reverberates through our organization over 20 years later.

Below you can find one of Nelson’s poems, Out of the Chamber:

Strapped down on an MRI sled

Form in my pre-procedure

What they are looking for.

I have to trust.

It comes not easily

And now the cacophony of

The raps on the coffin-like structure

Oh my god a new sound

Sounds that could possibly be

But how would l know?

When does one know?

When you hear what I hear

I hear the new sound

Up dirt and tamping tired earth

Is what I hear

I see all too painfully dear

Parents’ gravestone, all too vivid.

I cry hard and long

For no one can see me

I feel no shame

Save that for my own

No one can feel what

But I can’t move

I can’t hold on

Loud enough to be heard

Above the din, louder than my

I’m breaking up. I’m crashing down

Out of orbit from another realm

The light blinds me

I wipe my tears

Out of the chamber.

If you share our commitment to the power of community and creativity, please consider making a one-time or recurring donation. Your support will help ensure that our work can continue creating opportunities for writers from under-resourced communities. Here’s to the next 20 years of NY Writers Coalition!